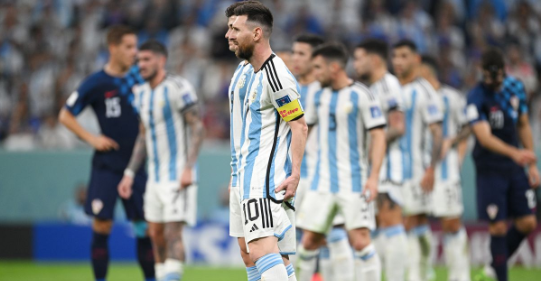 Lionel Messi skips a training day after announcing the World Cup finals as the final WC game to avoid a hamstring injury before the match against France.

With Argentina playing against France at the FIFA World Cup finals, all eyes will be on the star player, Lionel Messi. The left-footed forward recently announced the finals would be the player’s last World Cup game.

Since the stakes are so high, Messi and Argentina are making foolproof plans to enter the match in perfect condition. That is why the player and the rest of the starting 11 took a training day off on Thursday. However, Argentina’s goalkeeper, Emiliano Martinez believes that the team keeps getting better and better.

This was done to avoid any unnecessary injuries, especially for Messi, who faces hamstring concerns. Many fans saw the player poke his left hamstring during the game against Croatia, troubling everyone.

However, the recent decision by the team management should not alert fans, as every player is receiving ample rest. Foot Mercato says that Messi had some minor hamstring pain, which will go away after he gets some rest.

After overcoming Croatia, the player expressed his eagerness for the upcoming match by discussing it. Messi confirmed that the player felt well and was prepared for the upcoming game. The 35-year-old attacker said that nobody was surprised by how much running was necessary throughout the game.

A World Cup trophy is the only major achievement that has eluded Messi throughout his fruitful career. Furthermore, it has been over 30 years since Argentina lifted the trophy. Thus, the upcoming match appears to be the perfect opportunity to bid the legend a befitting farewell.